Skip to content
TICKETS ON SALE NOW FOR ALL SHOWS LISTED 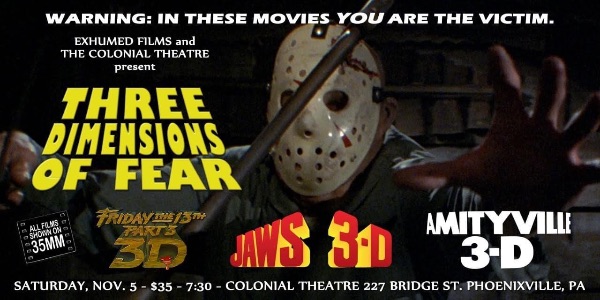 Next week! A new dimension in TERROR is coming to the Colonial Theatre in Phoenixville, PA on Saturday, November 5! Exhumed Films presents THREE DIMENSIONS OF FEAR, a triple-bill of second sequels from hugely popular 80s horror franchises in 3D!  See FRIDAY THE 13TH PART 3 3D (1982), JAWS 3-D (1983) and AMITYVILLE 3-D (1983) in all their eye-popping three dimensional 35mm glory on the big screen as they were meant to be seen! If you’ve only seen these films in 2D, you are missing the best dimension!

Seating is very limited, so get your tickets early!

Philly horror fiends… you better watch out! Exhumed Films re-teams with the Lightbox Film Center for HOLIDAY HORRORS! on Dec. 9th! Join us for a double-bill of festive fright with two extremely-rare — and super-rarely screened — 35mm prints of DON’T OPEN TILL CHRISTMAS (from the makers of PIECES) and TO ALL A GOODNIGHT (from director David [LAST HOUSE ON THE LEFT] Hess) at the Lightbox Film Center’s new location in Center City! There will be holiday-themed trailers before the movies and door prizes! 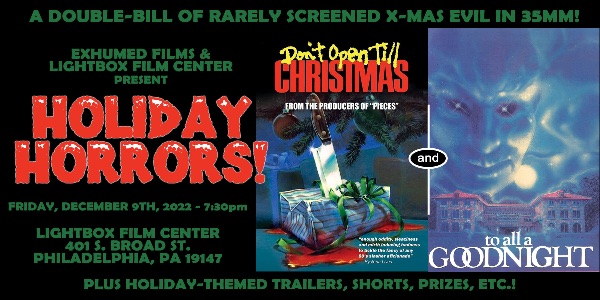 THE SPACE IS A NEW SCREENING ROOM AND RETRO ARCADE COMING SOON TO NEW JERSEY FROM THE CREW BEHIND EXHUMED FILMS.  SEE ALL ABOUT IT HERE !